This is what I Want to know About JTU! 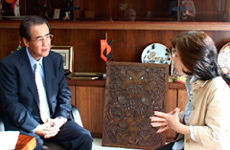 In response to the question “What is JTU?”, many will answer that it is a labor union of teachers. Perhaps it is the only thing they know about the organization. Through this interview, you will know the very basics JTU.

I hear that there are members of JTU among teachers working at specialized schools. Many people’s strength is better than being alone. If teachers can get together with the same commitment to children’s development, many more new possibilities are likely to emerge.

Conflicts between strangers are interesting, as is the case with rumors. I was impressed by the words “an integrated stance to the outside”.