Japan Teachers’ Union was born soon after the end of the World War II, on June 8, 1947, as a result of the unification of three teachers’ organizations. The founding assembly was held in Kashihara Stadium, Nara Prefecture, where there were accommodations thanks to absence of war damages.

“Upon the consensus of 500,000 teachers from all over the country, we have just formed Japan Teachers’ Union with great joy and expectation…. We are committed to playing an important role in the construction of a new democratic order and the creation of a new Japanese culture…. With all the strength of 500,00 teachers who are now connected with each other, we will seek for reasonable improvement of teachers’ treatment and for the advancement of their social and political status. We also pledge to strive for the construction of rich and democratic education and culture, by combating and eradicating all the bad conditions remaining in our country, in broad solidarity with workers and farmers all over the country as well as worldwide” (quoted from The History of JTU, JTU, 1981)

Since then, JTU have found itself in the midst of different struggles. The Korean War started in 1950, which led to the establishment of the Reserved Police, which is the predecessor of the Self Defense Forces. The next year witnessed the emergence of considerable controversy about whether Japan should conclude peace treaties with all the previous enemies or principally with the United States. In that year, JTU took the lead in the labor movement by adopting the Four Principles for Peace (full pacification, adherence to neutrality, opposition to the provision of military bases and against rearmament) and the slogan”Do Not Send Our Students Again to Battlefields”.

Gathering Drops One by One

For more than fifty years since 1951, JTU has organized peer activities for the improvement of teaching all over the country. Teachers have gathered for the annual National Meeting for Studies on Teaching to exchange the outcomes of their practices and reflections. Ms. Hideko Maruoka describes the National Meeting as follows:

“The National Meeting started at Nikko and is now going out from the springhead. Gathering drops one by one, introducing water from streams and coming together with other small rivers, it is getting more and more momentum…. One magazine wrote about the first meeting and said, ‘Consciences in Japan have got together at Nikko’. While I was half-ashamed about it, I was sometimes moved almost into tears by the faces of the teachers who occupied the venues. For example, their shoes. When I was about to enter a workshop room, I found many shoes with patches and worn-out soles…. Even if the National Meeting is subject to mean criticism, no one will be able to cool down the hot heart of those who had come there along cold roads on these shoes with a lot of holes” (A Post-War Spirit, Hitotsubashi Shobo, 1983)

The National Meeting has drawn as much enthusiasm as this from teachers in Japan and, in January 2004, observed its 53rd anniversary in Saitama. 3,000 teachers from all over the country took part in the preliminary meeting on the first day. Members from Saitama Teachers Union and Saitama High School Teachers Union presented skits with children, introducing Maruki Gallery and its Hiroshima Panels and stressing the importance of human rights and peace. On the remaining days, teachers were divided into 26 workshops and involved in discussions on the basis of some 850 practice reports. 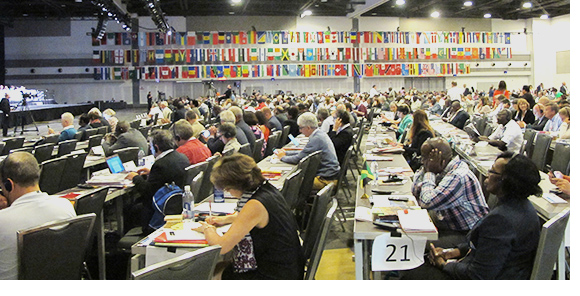 In the special workshop on the issue of academic abilities, a panel was organized under the title of “Academic Abilities We Pursue: Redefining the roles of schools and teachers for the development of enriched academic abilities”. The panelists expressed concerns, such as, “Propaganda about low academic abilities has led to growing influence of the education industry, such as juku (supplementary private) schools, as well as to more burdens on household economies and the widening gap between social strata”. In addition, reports were presented from all over the country about their practices for helping children to acquire the basics hard and fast and for promoting “comprehensive learning” in connection with academic subjects.