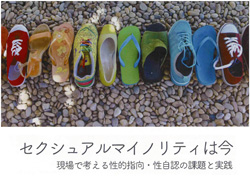 In Japan, following the international movement by WHO, Ministry of Justice coped with challenges on human rights of LGBTI but it was not spread to the whole. In 2006, an elementary school children of gender dysphoria was largely bought up by mass media and it was 2010 that Ministry of Education first issued a notification on considering it. Since then, there were researches and analyses on bullying against and/or suicidal thoughts of children and young people of sexual minority. These caused Cabinet Office and Ministry of Justice to issue notifications. Finally, Ministry of Education carried out a research on schools’ practices in gender dysphoria in 2014 and issued a notification which requested schools to consider children of gender dysphoria and sexual minority in 2015. But JTU research made clear that less than 25% of teachers acknowledged the notification and JTU appealed to the Ministry to improve it. In 2016, the Ministry publicized a pamphlet on good practices for children of gender dysphoria, sexual orientation and gender identity. This could accelerate our achievement of JTU and school teachers throughout our country.

JTU held Conference on Sexual Orientation and Gender Identity and Exchanges Good Practices on November 19 with stakeholders and support groups at Waseda University in Tokyo. Teachers, educational professionals, researchers, students, NPOs supporters as well as LGBTI themselves participated it. The research on bullying based on sexual orientation and gender identity was reported at the plenary and there were 4 groups to discuss good practices, teachers’ trainings, UN movement and Canadian schools, and the necessity of legislation to ban discrimination. The conference was very successful and a student remarked ‘I was very impressed by enthusiastic of the participants.’

JTU will keep advocate to build the society which respects human rights.