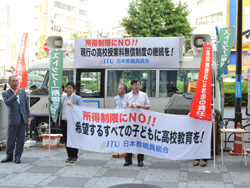 In 1995, 164 countries governments signed Millenium Development Goals and committed to achieve the 5 pillars by 2014. One of the pillars is that every child is to be ensured access to free compulsory education. Education International (EI) has set it up as ‘Education for All (EFA)’ and worked for its achievements with international organizations such as United Nations, UNESCO, World Bank, ILO. JTU has strongly engaged in EFA as an EI affiliate, and has reinforced the campaign not only in the international trade union movement but also through the domestic social dialogues. Especially, JTU annually carries out National Campaign on Education Reform (NCER) as our own EFA activities.

Here are some interesting examples of NCER; Niigata Prefecture Teachers’ Union and Niigata High School Teachers’ Union The 2 unions had social dialogue opportunities with citizens throughout Niigata Prefecture and listened to what they had views on education. The citizens said, ‘This activity is actually nice. I really hope that education is improved.’, ‘I guess that class size of 35 pupils is too many. Teacher should be tough to carefully watch all of them.’ The unions will appeal to the Prefectural Assembly to make class-size smaller.

Akita Prefecture Teachers’ Union The union held Children Conference where elementary school pupils and junior high school students honestly spoke their views on what they thought about their school life. They mainly mentioned about learning environment such as ‘It is unfair teachers decide who use which school facilities’ or ‘My class doesn’t have good environment comparing with others.’ The children concluded ‘It was good for me to say what I’m thinking’ or ‘I enjoyed very much this conference because I was happy to hear the others’ views.’ For teachers and parents, it was also a great opportunity to listen the children’s voice, who have the right to education.

JTU Headquarter advocated to citizens about the importance of tuition-free high school system. Children have the rights of access to free higher education according to Convention on the Rights of the Child. The previous administration introduced the tuition-free high school system. Thanks to this system, less students left schools because of economic reasons. We appealed on the streets and gather signatures expressing the agreement for the system. Unfortunately, the current administration changed the policy, that is, children whose parents have annual income more than Yen 9,100,000 can not receive the free system. JTU strongly opposes its policy change.

EI has moved forward a new dimension of EFA beyond 2015 and has launched ‘Unite for Quality Education (UQE).’ Reassuring the meaning of EFA, appealing governments for its achievement beyond 2015, all the 177 EI affiliates in the world with more than 30 million members unite together for it. It should be noted that EI believes it is not enough to ensure education, but ‘quality education’ with the 3 pillars of quality teachers, quality tools and quality environment.

Mr. Okamoto, JTU General Secretary, attended the UQE events in NY as Chairperson of EI Asia Pacific Regional Committee, and had a speech at the World Teachers Forum.[movie]

I am Okamoto from Japan Teacher’s Union. I was elected Chairperson at the 7th EIAP Regional Conference in KL held last month. My first job as EIAP chair is this launch of UQE. I am excited and feel a great sense of responsibility. I hope to channel all my energy for the success of this campaign for the children of Japan, Asia Pacific, and the world.

Allow me to outline some issues in Japan in realising high quality public education. Unfortunately, there are growing political forces in Japan that try to promote neoliberal thinking or nationalistic policies. This is also being pushed onto education.

One of JTU’s initiatives is ‘smaller class sizes’. The DPJ government, which was committed to ‘Children First’, was established in 2009. A decision was made to gradually decrease class sizes from 40 to 35, for the first time in 30 years. It began in Grade 1 and reached Grade 2 but the new Liberal Democratic government has stopped this program.

Increase in education expenses is also a major issue. The previous government introduced free senior high school education. It also withdrew the hold there was on the gradual introduction of free education, in relation to the ratification of UN Social Rights. The new government policies attempt to negate this and are looking to place means testing of parents for free tuition. There have been no discussions regarding free higher education and with strong push by business, the Government is attempting to promote a reform that prioritises the strengthening of international competitiveness. It was reported at the EIAP Regional Conference that neoliberal policies in education is a serious issue in South Korea. Also in the region, there are children in conflict areas trying to escape, or children having to work even thought they would like to go to school. Many countries will be unable to reach the MDG goal of achieving universal primary education by 2015.

Our mission in the 21st century is to create a society where peace, human rights, environment, coexistence and democracy are respected. Education above all else is necessary in achieving this, and schools are the symbol of education. Direct advocacy to governments and politicians are of course important and we will persevere in this. However, that alone is not sufficient.

The JTU considers social dialogue with students, guardians and citizens to be the core of our work and we are holding gatherings and symposiums together with teacher and staff organisations in each prefecture. We will also conduct a national education campaign using mass media in November.

This concludes my report – let us join in to work together! Thank you.

JTU’s slogan ‘Never send our children to battlefields’ should be vitalized not only for our domestic activities but also in the international solidarity. Even children who are in danger by surrounding armed conflicts have rights to education. Let us unite with our EI colleagues and jointly spread UQE throughout the world.

The new President was elected at the 111th JTU Extraordinary Congress