The 156th Central Committee was held in Iwate. 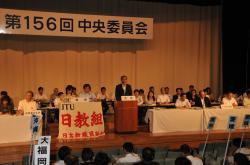 Mr. Ryosuke KATO, the JTU President, gave an address at the start of the conference, “We decided to hold the Committee in Morioka so that participants would be given an opportunity to see the progress of recovery in the disaster-stricken area after the 2011’s East Japan Earthquake and Disaster and become more familiar with many issues left there.”

JTU President Kato continued, “Upon hearing about dreadful cases of junior high school students committing suicide due to bullying as reported in the press, we find that the grim reality of there being children putting an ‘end to their own life’ compels us to feel as if we have made a fatal failure in supporting them. To ‘continue to closely watch over children’ is easy to say, but it is actually very difficult to put into action. I cannot emphasize enough the importance of every teacher’s keeping a close eye on children, but unfortunately there are limitations to what one teacher could do in the effort of protecting them. I think that there are two points that must be questioned in sustaining that effort: whether a system where children are closely watched over in the school community as a whole has been successfully established, and whether the Board of Education has succeeded in building a structure where schools with such a system are encouraged.” Also, he commented, “We must ask ourselves whether we have managed not to lose sight of the purpose of school education that is to establish a place where children mutually learn, grow and support each other.”

The “appeal for questioning the performance of education in closely watching over children” was presented at the Committee. The “special resolution calling for early consideration and enactment of the bills on basic labor rights of public service employees” was also adopted there. Documents used at the Committee on those topics are downloadable from the links below for reference.