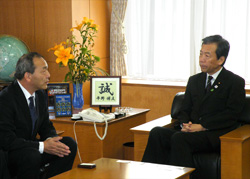 In the discussion, the Minister Hirano mentioned that education is extremely important from the perspective of nurturing support for the next generation, that the Ministry will work on promoting smaller class-size despite the financial difficulty, that actions addressing children-related accidents are necessary and that above all restoration of education in the disaster-stricken areas after the East Japan Earthquake and Disaster is crucial.

In response to the above points made by the Minister, JTU President Kato commented, "Rebuilding of education in the disaster-stricken areas is a pressing issue. Restoration of life of parents is a major challenge, not to mention the education issue. We JTU are eager to do what we can for the benefit of disaster victims. Also, education is work that requires a long-term commitment and dedication. We JTU aspire to keep on making concerted efforts for the cause of children."

At the end, the Minister Hirano articulated the Ministry’s resolution on working towards development and enrichment of education, with which the parties concluded the meeting.