The 157th Central Committee was held in Fukushima. 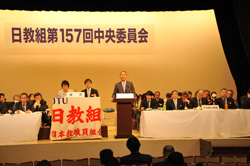 Mr. Ryosuke KATO, the JTU President, gave an address at the start of the conference, "Through convening of the Committee in Fukushima we seek to express JTU’s resolutions that facts of the Fukushima radiation accident and the Great East Japan Earthquake and Disaster should not be forgotten and that the reality of the disaster-stricken area should be accepted as a universal issue of all citizens of Japan."

JTU President Kato continued, "Issues including enlargement of educational budget, materialization of smaller class-size and increase of quota of teachers cannot be accomplished on our own. Those requests have been recognized as ‘issues’ from accumulation of educational practices and formed based on discussions with parents and community. As such, we should be able to gain social sympathy and resonate with parents’ thoughts through the effort of achieving them. Also, he commented, "We intend to deliberate on the significance of various education-related civil society movements that have been promoted with involvement of parents in respective prefectures."

The "appeal for individuals to introspect about their awareness of human rights and for striving to establish the rights at school and in community" was presented at the Committee. The special resolution on the national government’s request for wage cut of local public service employees was also adopted there. Documents distributed at the Committee on those topics are downloadable from the links below for reference.

Global Action Week for Education; JTU presents quiz and game on the rights of the child