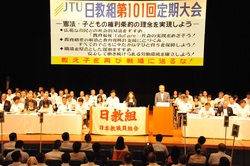 In the address Mr. Ryosuke KATO, the JTU President, mentioned JTU’s recent movement including promotion of social dialogue, efforts for realization of policies and appeal for reform of the National Public Service System. Upon re-acknowledging the fact that "key players in education are undoubtedly children," he commented, "The origin of JTU’s movement lies in practices in the classroom. We face reality of the situation surrounding children and work on changing the role of education in collaboration with parents and citizens in the community. In this course of action we test our theories and build practices. It is this effort through which we deliver practices focusing on children’s individual dignity, or democratic practices in situations that are most familiar to us." Moreover, he warned the audience about education policies of the current Abe administration by stating that the policies being conducted as "education reform" under the name "education rebuilding" are the exact opposite of this ideology. President Kato then presented the mission of establishing "individual dignity" which is also one of the fundamental concepts for sustaining the current Constitution of Japan. He announced a resolution stating that the mission "can never be accomplished without our continued efforts."

In the discussion, efforts for promoting social dialogue with a wide range of citizens and protecting quality learning of children were reported. Meanwhile, many issues and problems concerning income limits provided in the tuition-free high school system and assessments of academic achievement and learning situation were raised. Much was reported about the current situations surrounding harsh working conditions at school and salary reductions of local public service employees. In addition, understanding of the meaning of closely watching over children, parents, and teachers and education professionals who are victims of the Great East Japan Earthquake and Disaster was shared among participants.

On the last day of the Congress, special resolutions on efforts for taking a stand against the "education rebuilding" underway under the Abe administration and realizing education policies that we at JTU demand, for building a sustainable and peaceful society by abandoning nuclear power generation and for materializing concepts of the Constitution of Japan were adopted. The Congress was concluded with a declaration stating, "Let us strengthen our movement that originates in teachers’ workplace by valuing mutual connections between people." The declaration was presented to the audience, showing understanding about the current situation that education is in crisis.

[Slogan of the 101st Ordinary Congress]
Let concepts of the Constitution and the Convention on the Rights of the Child be materialized. Let us promote a social dialogue with a wide range of citizens and work toward realization of "Edufare (Education as Welfare)" society!
Let us work on eliminating education inequality and support reconstruction of education so as to protect quality learning and growth of all children!
Let us proceed with our movement originating in teachers’ workplace and establish a work environment where teachers can continue to work at ease!
Never again will we send our students to the battlefield!

The documents distributed at the Congress are downloadable from the links below for reference.