The project to Improve Primary Education in Afghanistan in 2013 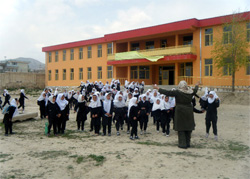 In Afghanistan, most of school buildings were destroyed and occupied by the former USSR’s military invasion and civil wars for 30 years. During the Taliban era, girls were prohibited to go to school and many intellectuals and educators were assassinated. When the Taliban government was fell and the provisional one was created at the end of 2011, the international community has contributed to rebuild the devastated education. Afghanistan Ministry of Education launched 5-year Plan for Educational Development and aimed to improve the enrollment rate of both boys and girls to 98% by 2030. The plan has priorities such as secular education, Islam education, review of curriculum, teachers training, literacy education, repair of school buildings and others.

JTU has cooperated with Shanti Volunteer Association (SVA) to improve learning conditions for Afghan children since 2004.

The enrollment rate in 2010 was 55% for elementary schools and 32% for junior high schools, which showed there were numerous challenges. The half of school buildings were not suitable for use and many children had no choice to study under tents or outside. They needed more teachers who completed higher education, especially women teachers. Quality of education and girls education were challenges to overcome. The literacy rate of 15 years old or elder grown-ups is 36% which is still quite low. Social security was worse and 481 schools were closed or burned by anti-government militaries in 2013. There are 165.000 teachers, but 80% of them did not have teachers licenses. Training of teachers was a big challenge.

In 2013, the project started to build a school building in Kabul, whose students used to study under tents outside. It had elementary, junior high and high schools, and there were 4082 pupils and students in total. Also, the project tried to have a broader spread of library at schools and it had activities of mobile libraries at 23 elementary schools and handed picture books SVA made to 45 schools. The campaign held children’s library for story-tellings and other events.

We will continue the project in 2014 to improve the primary education in Afghanistan.