Reconstruction of Non-regular School Buildings in Nepal in 2013 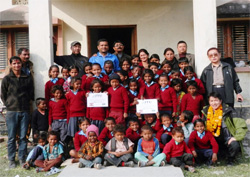 Child labor deprives children of the opportunities of education as well as harms their healthy development. Therefore, we need to face the problem as a whole international community. In Nepal, 1.600.000 children are forced to do child labor according to a statistic in 2008. This number is equal to 1 in 5 children among 7.770.000 whose ages are between 5 and 17. What is worse, the low literacy rate is a serious issue. In 2011, the rate was 65.9% and that of women in rural areas was estimated to be much lower.

Since the kingship was abolished in 2008, they have had unstable political situations and economics tardily have not developed. It is true for the educational system and contents. Nepal Ministry of Education establishes "Center for non-regular education" for children who live in poor areas and do not have access to public schools. JILAF, which was established as non-profit organization by RENGO (Japanese Trade Union Confederation), has ran 9 non-regular schools in corporation with Nepal Trade Union Congress. JTU has contributed this project since 2013.

In 2013, the project reconstructed and repaired 3 schools among the 9. They fixed walls and ceilings, fitted glass windows, building walls around school buildings, and newly settled toilets. Thanks to these reconstruction, children secured safer and more comfortable school life and learning environment.

In 2014, the project will operate teachers trainings and settle up mini-libraries to improve quality of education.