The new JTU President, Mr. Ryosuke Kato gave
an inaugural address at the start of the fiscal year of 2012. 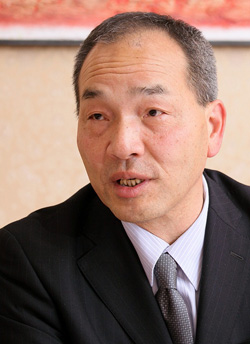 The East Japan Earthquake and Disaster has left us much sorrow, many lessons and issues. After the catastrophe, many people have visited the disaster-stricken areas as volunteers. There have also been youths calling out for foundation to people at station fronts. We have received much support and voices of encouragement from people overseas. It seems that every effort to support disaster victims has sustained their spirits, which has emotionally moved all people living in Japan. The situation has led me to realize that we humans are living in a world connected by mutual bonds between people as we always should be. This belief is alluded to by the Japanese word "kizuna" which means bonds that connect people to each other.

How about the status quo of Japanese society and the situation in which children in Japan are placed? Under the regime of New Liberalism, gaps between the wealthy and the poor have widened all the more while results of the gap widening have merely been attributed to "self-responsibility" of individuals. It is said that one in every 6.4 children is in "relative poverty" and that the economic disparities have spread to the education sector, inducing educational disparities. How could we talk about what "kizuna" (bonds between people) to nurture when such status quo is virtually neglected?

For the five years I had worked as the President of Kanagawa Prefectural Teachers’ Union, I had consistently advocated for the importance of confronting issues of the gap-widening society and "child poverty" with integrity. As teachers interact with children on a daily basis on the job, we do face the reality of children’s lives in Japan. It is the direct confrontation that has become more necessary than ever.

Education is "infrastructure" that is indispensable to society while also being a "lifeline" for children. We must proceed with establishment of the "right to education" that is to specifically support "the right to subsistence," prescribed in the Article 25 of the Constitution of Japan. I believe that the concept of "Edufare (the coined word for education as welfare)" that JTU has developed will pave the path for that effort.

However, the Heads of some regional governments in Japan have been actively voicing for adopting "competition" to education without making serious efforts in tackling the disparity issues. The aim of their policies is to enable every parent and child to select a school, which will inevitably force unselected schools to get reorganized with others. As noted in the press in early March, the "education reform" policies, which were undertaken in the past by the United States’ Bush Administration and were similar to the ones the aforementioned Heads are advocating, collapsed.

Education is "work" that must be positioned furthest from a realm where the "logic of elimination" is applied. Substantially, what matters to education is mutual involvement between people. School must be a place where balance between well-developed education theories and approaches is maintained. It should never be where children are educated exclusively by one excellent principal or teacher. In other words, it should be a place where children are nurtured by collaboration between teachers of a variety of backgrounds and with diverse skills and values. That is, it is the idea of mutuality supporting the "kizuna" that should be respected at places where education is conducted.

In order to help deliver such education, we will focus on building trust with parents and citizens through accumulation of educational practices at the workplace where children and teachers spend time together. It is also those efforts that we submit as our response to those crying for the unilateral "education reform."