The Emergency Support for Syria Refugee in 2013 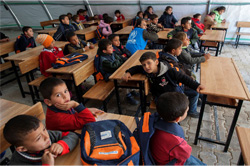 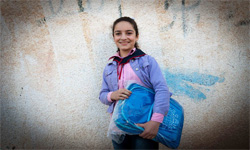 JTU has cooperated with Japan for UNHCR since 2011. Civil war in Syria happened in March, 2011, and more than 2.900.000 people were forced to leave their home and flee to neighboring countries. Among them, over 1.400.000 are children. It is estimated that approximately 3.600.000 Syrian refugees will be fleeing out of Syria by the end of 2014. They endure the hard lives, at the same time, host countries face economic and social burdens. Considering the intensified situation of Syrian wars, as a member of the international community and as a teachers’ union, JTU decided to take emergency actions to support Syrian refugees including education.

UNHCR protects refugees fleeing from wars without any belongings, supplies shelters, foods, essential materials and hygiene services. The office also cooperates with governments of host countries and prepares for refugee children to receive education by bearing the costs, supplying textbooks, and carrying out teachers trainings. As a result, 55.000 refugee children could go to school. In Iraqi, 14.000 children had access to education. UNHCR distributed desks, chairs and learning materials for domestic refugees.

It does not seem to cease Syrian wars. JTU will continue our contribution in 2014.